Did you know that legend has it that Boudicca's body is said to have been buried between the platforms 9 and 10 in Kings Cross Station in London? We stepped into the shoes of this famous warrior-queen today and we used our oracy and debating skills to write an inspiring speech to present to our fellow Britons on the eve of battle...weapons at the ready!

Please read one of our galvanising speeches

This afternoon, Year 4 explored a major event in Ancient Roman history- the invasion of the Romans in Britain. We used our understanding to create an extended piece of writing based on this momentous event. We explored what Britain was like before the Roman occupation, Caesar's invasion, Claudius' invasion and the Roman invasion of Scotland. We hope you enjoy reading our wonderful work!

We worked independently today to explore the political life and impact of Julius Caesar. We explored his fascinating life, political career and the impact he had on Rome and the future of politics at the time.

Lily said: "I really enjoyed learning about how Caesar impacted the politics of Rome. This lesson will help me with my studies of Shakespeare's play, Julius Caesar, in Year 5 next year." 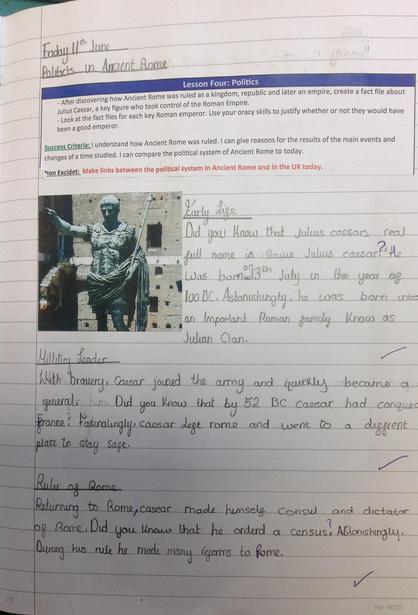 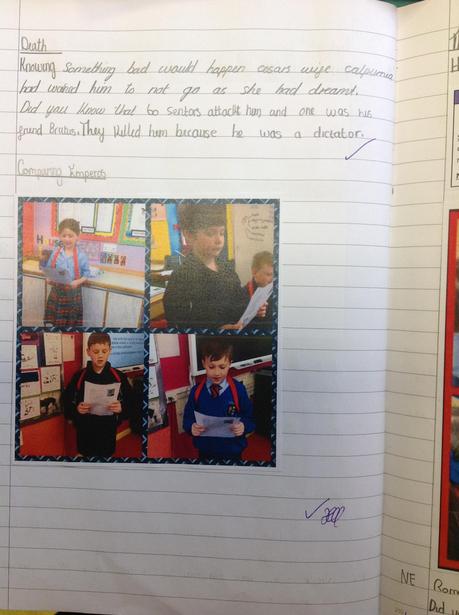 Exploring Artefacts- Who were the Ancient Romans?

This afternoon, Year 4 examined artefact replicas from Ancient Roman times in order to learn more about the Roman people, their ways of life and their achievements. It was fascinating to discover that the children of Ancient Rome would use toys similar to what we can still see today.

Explaining what we discovered 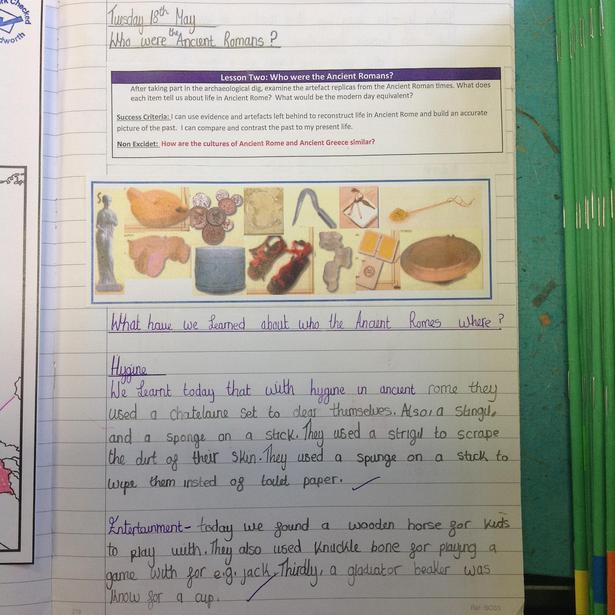 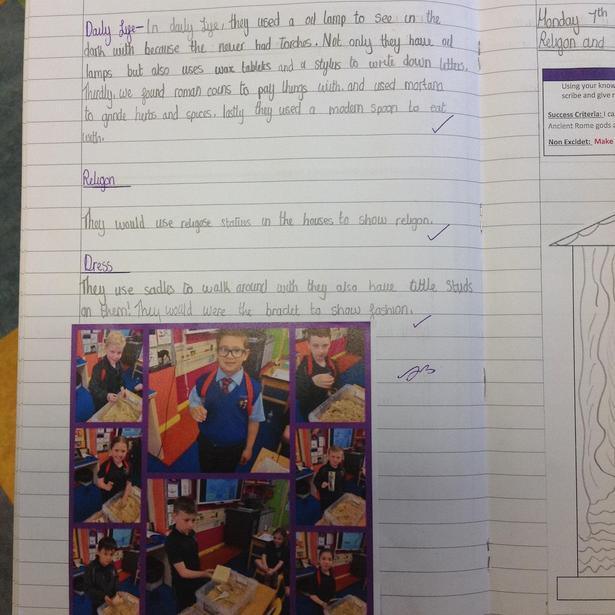 Did you know that the Trojan War is a famous story told in the Iliad? The Iliad is an epic poem written down about 2,700 years ago, although the story is much older. It was first told and sung orally during the Greek Ages by travelling storytellers.

After the Greek Ages, Homer, a Greek poet, supposedly wrote down the entire story somewhere between 750 BC and 650 BC, so that it would never be forgotten. The Iliad is the story of the 10th and final year of the Trojan War. It focuses on a brave and powerful Greek warrior, Achilles. We explored the story of the Trojan War and then used our knowledge and understanding to rewrite the (epic) tale in 100 words!

Here is an example from Amelia:

Three Goddesses had an argument so they asked Prince Paris of Troy to settle it. Paris accepted Aphrodite's deal so that he would fall in love with a woman called Helen- the queen of Sparta. King Menelaus, the King of Sparta, was extremely angry so sent an army to get her back. The tiring battle lasted for ten years. The war finally came to an end because the Greek’s created a wooden horse to trick the Trojans. At first, the Trojan’s thought it was a gift from the Gods however the Greek’s were inside and killed them all.

Did you know that historians cannot be certain the Trojan War actually happened? When we explored the facts we learnt that, according to the Greek literary evidence, there were at least two Trojan Wars (Heracles’ and Agamemnon’s), not one. This made us think that the story in the Illiad, although amazing, is unreliable.' - Isabelle

I think that the key figures in the Trojan War, such as Hector and Achilles, are portrayed so well that they have to have been real. I hope the Trojan War actually happened as I like to believe in all of the heroes it describes! - Anthony 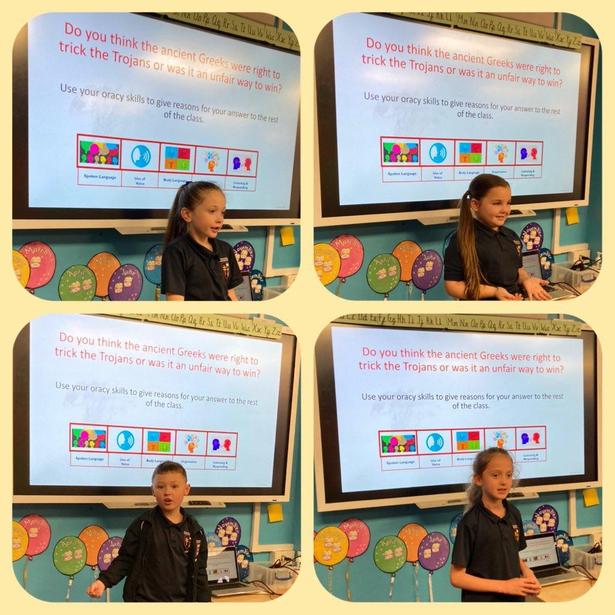 A depiction of the Trojan Horse in popular culture 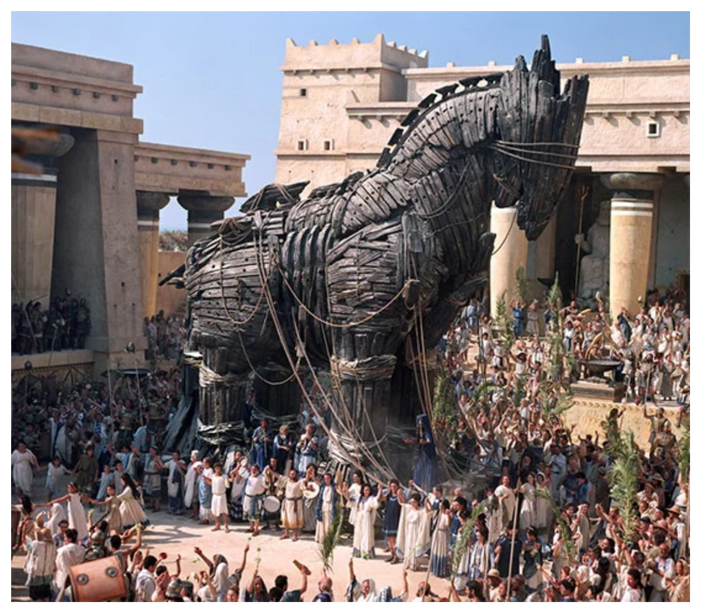 Motion: Zeus was the most powerful of all Ancient Greek Gods

We used our understanding of the Greek go and goddesses during a debate topic in Literacy. After collecting evidence from previous work, here are two examples of our propositional and oppositional points; showcasing our understanding. Who do you agree with?

'People of the audience I am certain you will agree with me! Zeus has a number of powers that included throwing lightning bolts, controling the weather and even people into animals. How could anyone deny his true strength? He was the most powerful God!' - Alex

'Only an idiotic fool would believe Zeus was the most powerful God! Zeus only became the king as he had help to defeat his father from his loyal brothers Hades and Poseidon. Without them, he would not have survived. I ask you how he can be the most powerful god when he does not work alone?' - Michael