This week, Year 3 began their exciting new topic all about the pre-historic period that lasted from the Stone Age to the Iron Age. We began our learning by exploring the location of Stone Age - Iron Age Britain and we began our working timeline examining the key events of the period. We will continue to add to this timeline in our book as we acquire more knowledge. 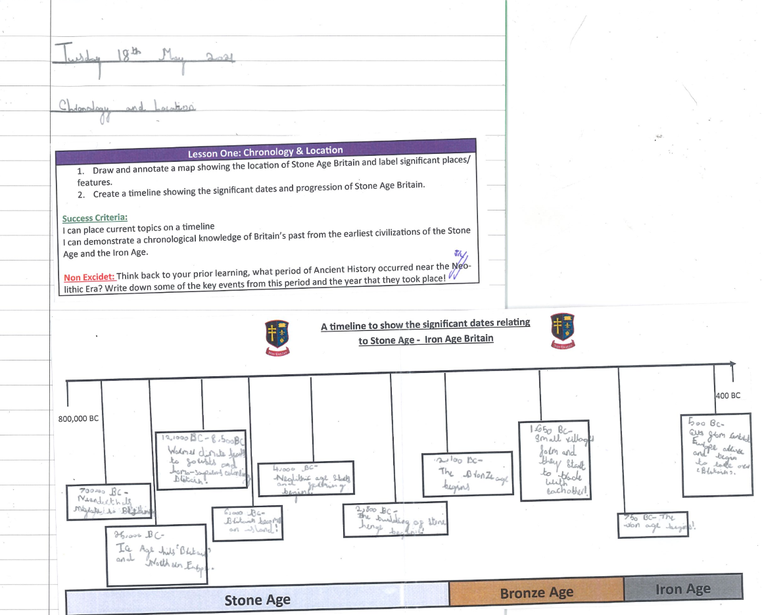 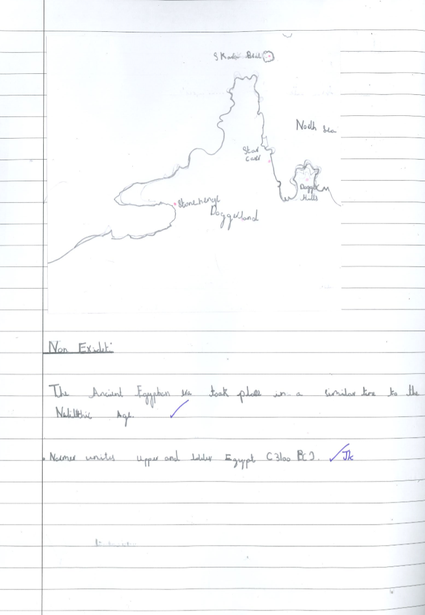 Stone Age to Iron Age - Who were the Earliest Humans?

In this lesson, we learned about neanderthals and homosapiens! We used artefacts to learn about the lives of the earliest humans and made judgements about what the artefacts told us about their daily lives. 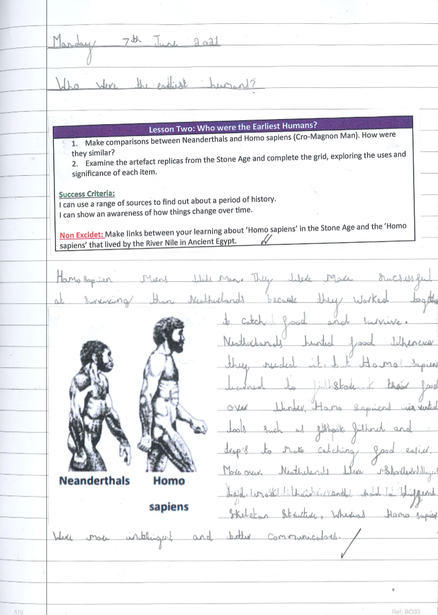 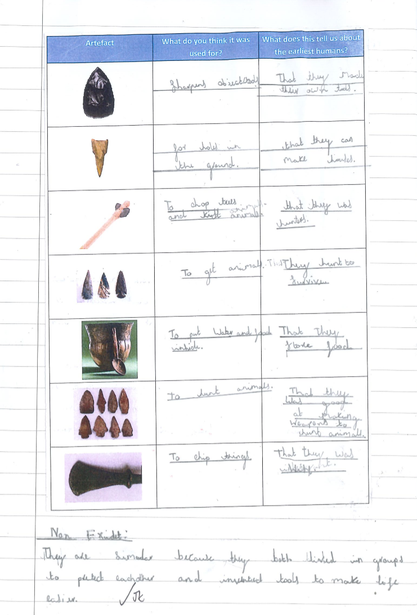 Today, we have been learning about the spiritual and religious beliefs of the earliest humans. We talked about how we know about these things because of the discoveries that archaeologists have made. 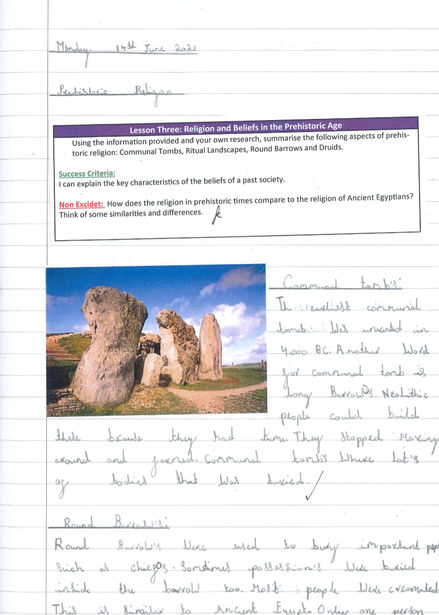 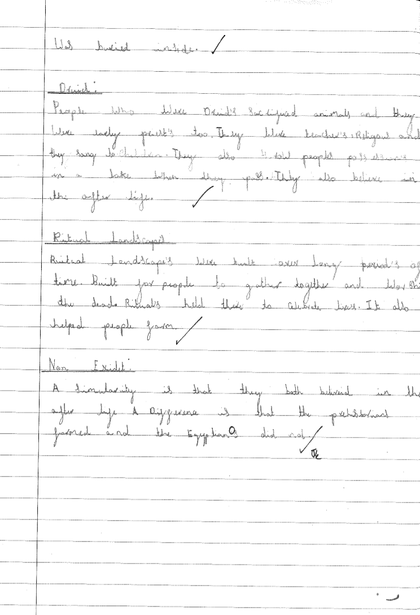 In this lesson, we discussed how little is known, but much is theorised, about power, education and politics in the Stone Age - Iron Age period. We used sources to research and present our findings to the rest of the class. 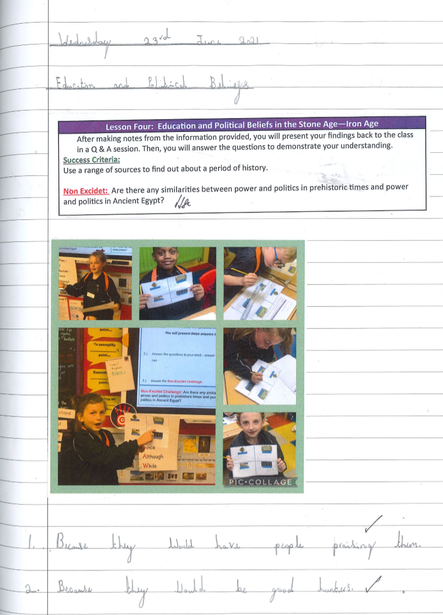 We're travelling back in time to Ancient Egypt!

This week, we learned about the key events that occurred during this significant era in our world history and we sequenced them in chronological order. Dates during this time were recorded as 'BC' because they took place before Christ was born. We had to be very careful when ordering the dates as the numbers went from greatest to smallest.

After that, we explored the location of Egypt and drew and annotated our own map. Additionally, we learned that the country was divided into upper and lower Egypt and that Tutankhamun was buried in the Valley of the Kings. Did you know that the earliest civilizations lived by the River Nile because they could grow crops there? The Nile flooded once a year so the land was really fertile- perfect to grow crops! 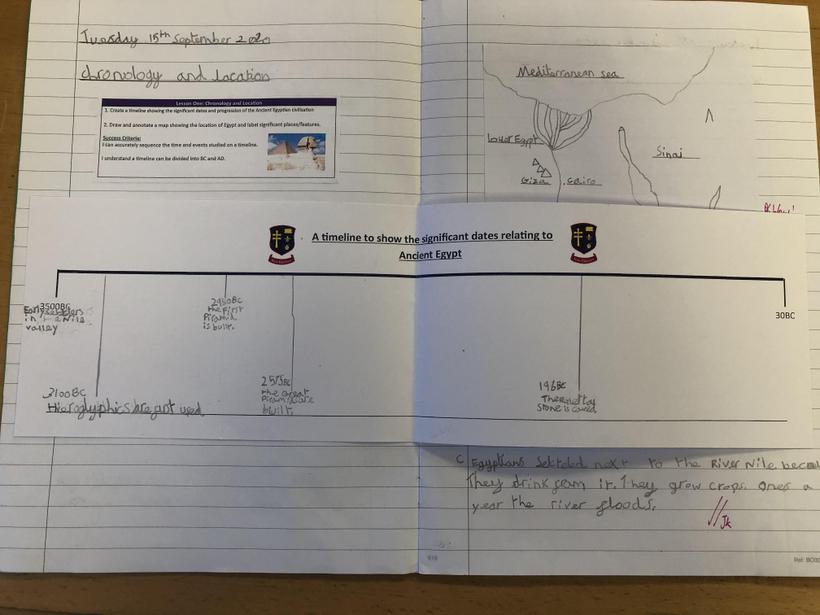 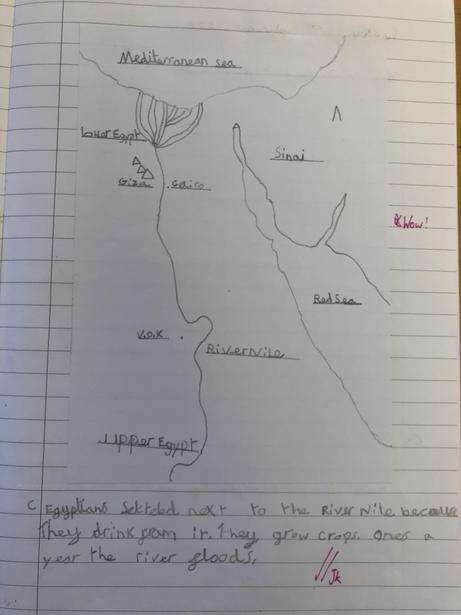 Who were the Ancient Egyptians? 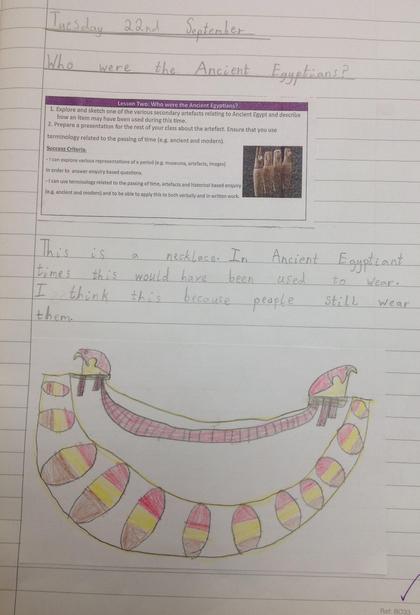 "I was shocked to learn that the Ancient Egyptians had board games just like we do now! They were so talented." Daisy, Year 3

This week we explored education and democracy in Ancient Egypt. We learned that boys from wealthy families had the best education. Many boys would be taught by their father to be a builder so that they could help building the pyramids. If they weren't good enough, they would be sent out of the village away from their family forever!

Bella, Class 4 said: "The Pharaoh was in charge in Egypt, which is similar to in England today because we have a Prime Minister; however, we vote for our Prime Minister because we live in a democracy, and in Ancient Egypt they didn't vote."

Bobby, Class 4 said: "If I lived in Ancient Egypt, I would want to be a soldier because everyone would think I was a hero! It might be a bit dangerous though." 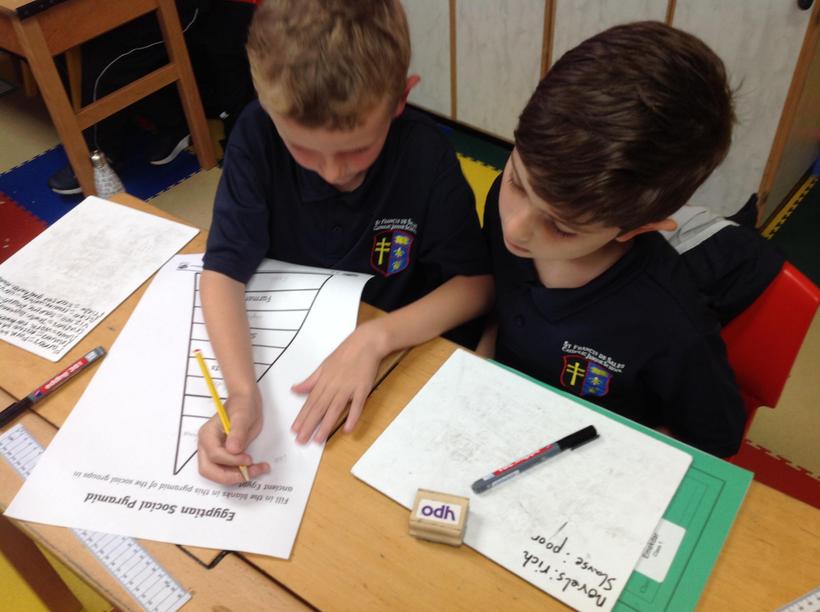 The hierarchy of education in Ancient Egypt 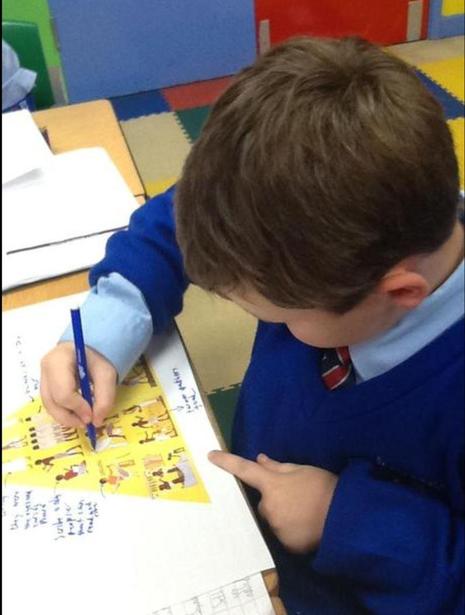 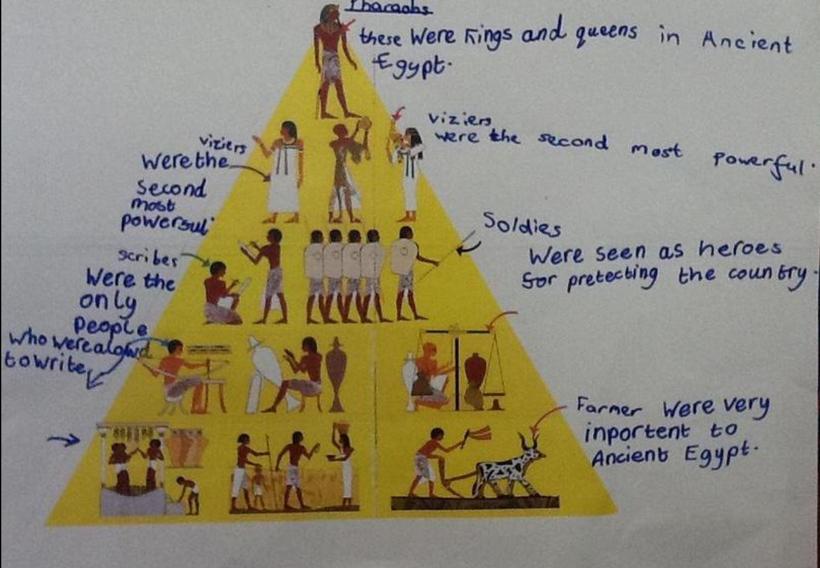 This week we learnt about Ancient Egyptian religion and beliefs, discussing how these compare to belief systems today. Through secondary research, we explored the significance of Egyptian gods and goddesses, selecting and recording our new knowledge through writing and artwork. 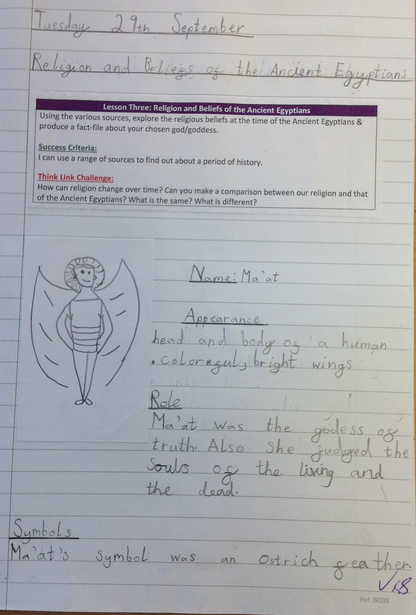 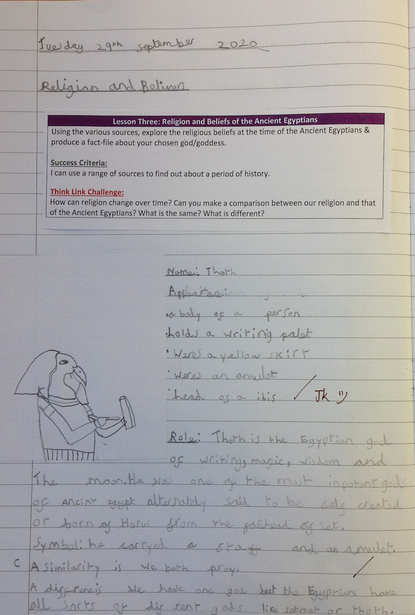 This week, we learned all about what housing and architecture was like in Ancient Egypt. With the time period spanning almost 30 centuries, we discovered that architecture changed a lot, and was largely dependent on wealth. However, we explored a classic home in ancient Egypt and labelled it's key features. We then compared and contrasted this to housing in our local area; Walton.

Maddison said: "Did you know that in many ancient Egyptian houses, the downstairs was used for growing crops? This is different to houses in Walton today because crops are mostly imported from different countries and sold in supermarkets." 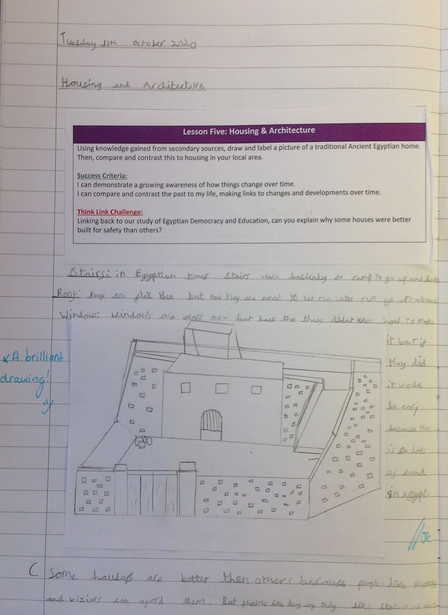 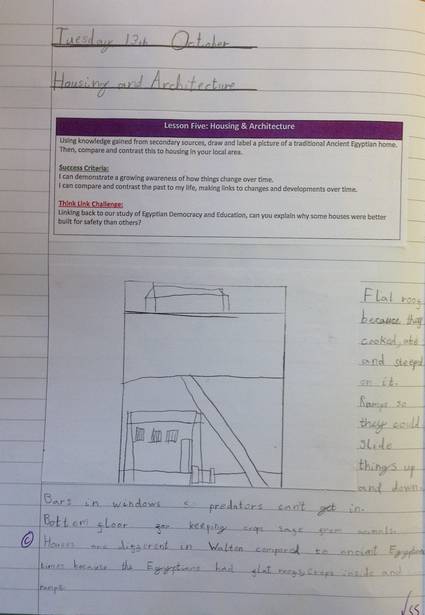 This week, we explored the death and mummification of Tutankhamun and why it was such a significant event. In addition, we detailed the key stages of the mummification process. Did you know that the mummy would often be painted with eyes to symbolise the pharaoh being able to see in the afterlife?