The Nou Camp is the home stadium of one of football's giants - FC Barcelona! They have recently won an historic treble of La Liga, Copa del Rey and the Champions League. On Merseyside, we know a thing or two about winning football trophies ourselves!

When we arrived, we couldn't believe how large this colossus of a stadium was. It has a capacity of over 99000 - that is bigger than Goodison and Anfield put together! The stadium is enormous but it has to be to fit in all of the trophies in! Messi needs a walk in wardrobe for all of his golden boots!

We got to learn about some of the history of Barcelona. They've had loads of amazing players, like Cruyff, Ronaldo, Ronaldinho and one who they now hate, Luis Figo. Did you know the current manager (Luis Enrique) used to play for Real Madrid?

We got see the press room, the away dressing room (there was a picture of Steven Gerrard), the pitch, the dugouts, the medical room, the TV studios and the club shop. We all had a picture with the European Cup. (Mr. Wah said we'd need to explain what that was to all the Evertonians. He said it was a competition Liverpool used to compete in a long time ago)

We enjoyed exploring the Nou Camp and we loved every single minute. The best part was coming out of the tunnel and pretending that we were Neymar and Suarez playing in a huge game for Barcelona. Més que un club! 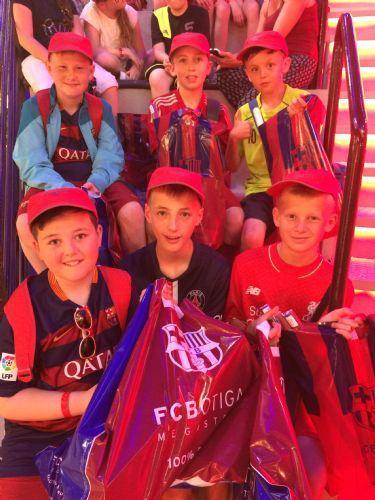