Today, Year 4 used their prior knowledge of chronology in order to create a timeline of significant events within Ancient Rome. Additionally, we also explored the location of Rome along with the vast Roman Empire which was pretty impressive to say the least! 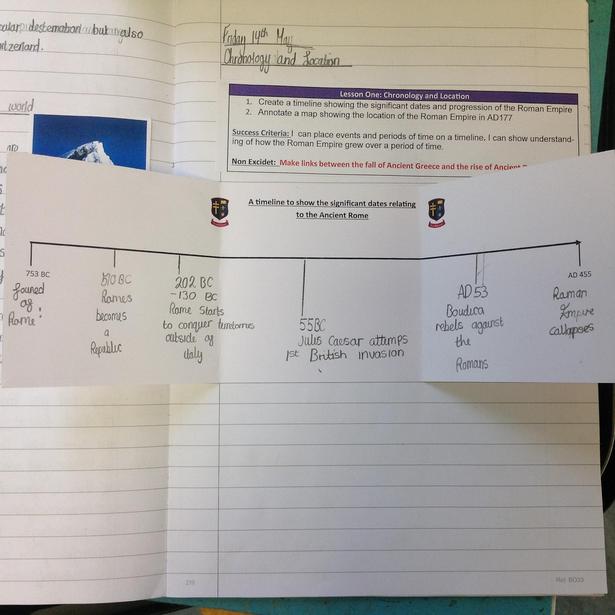 A map to show the Roman Empire 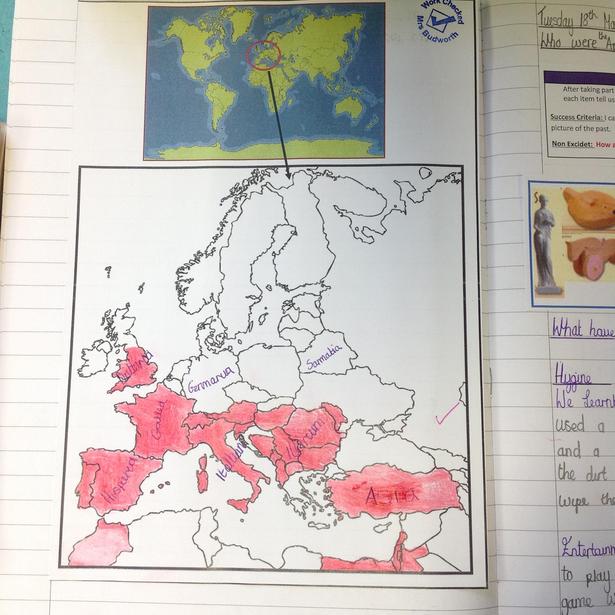 We used our prior knowledge of world history, in addition to the topics we have studied during our time at school, to create a timeline.  We discussed the time period that the images showed and then placed them into chronological order- starting with the earliest period and finishing with the most recent.  We then placed dates on the images, remembering that a smaller BCE date (i.e. 13BCE) is closer chronologically to the modern day.

Next, we looked at a range of secondary sources from the different periods and placed them on the timeline too.  We gave reasons for our choices by explaining what we thought the item may have been used for and compared the objects to items that we may use today.  Some of us enjoyed reading replica World War One letters; others examined some Egyptian hieroglyphics!

'This lesson was so interesting as I could use my knowledge of the Ancient Egyptians from last year to help me! Did you know that about 2,500 years ago, Greece was one of the most important places in the ancient world? ' - Frankie

Who were the Ancient Greeks?

In order to acquire more knowledge about the Greeks, we have been acting as archaeologists, looking at a range of secondary sources from the Ancient Greek period.

Firstly, we discussed that these artefacts were replicas (secondary sources) because originals (primary sources) would be extremely expensive and there would only be a limited amount that the whole world had to share!  Then, by using our deduction skills, we used our senses to feel, look and even smell the artefacts to see if we could acquire knowledge of the Ancient Greeks by working out what each item was used for.

We learnt that some items had not changed at all - spinning tops and coins are still used in the same way today.  However, the wax seal and wax tablet have changed over time.  We considered some of the items that we use today that are similar - for example, nowadays we have books, whiteboards and pens and we use envelopes with sticky backs to keep our letters private!

Finally, after making these comparisons, we considered what these objects taught us about life in Ancient Greece.  Similarly, some things were the same: they liked going to the theatre, playing games and going to school; however, some things had changed: we do not use armour any more (luckily!) and we do not need swords and axe heads for fighting like the Spartan soldiers!

'I really enjoyed discovering that the Ancient Greeks were one of the first people to have a theatre! I made this discovery after finding an artefact showing a happy and sad face!' - Chelsea, C8

'When iI discovered the children's spinning top it made me think about the children during the ancient Greek period. I love that they liked to play games just like me and my friends!' - Pheobe, C6

Religion and Beliefs in Ancient Greece- Greek Gods and Goddesses

'Did you know that Aphrodite was the greek goddess of love? She was a significant figure during the greek period as many people worshipped her. However, many also held her responsible for the Trojan War!' - Scarlett

Education and Democracy in Ancient Greece

Did you know that the two main provinces of Ancient Greece were Athens and Sparta?

Firstly, we had to acquire knowledge about the similarities and differences in the two provinces. We discovered that ,despite the fact that they shared the same heritage and language, ancient Spartans and ancient Athenians were very different.  The Spartans were warriors, disciplined and strong, and always ready to die for their homeland.

Athenians were educated and those who were not soldiers were philosophers, politicians, writers, musicians, and sculptors. Additionally, Athens was a democracy (the very first!) and Sparta was a dictatorship (King Leonidas was in charge!).

Using our newly acquired knowledge, we explored these differences together and then were split up into two groups: Athenians and Spartans! We then held a class debate, using our knowledge to argue why our province was the best place to live.

Using our oracy skills we were able to further develop our knowledge of Athenians and Spartans. Below are two examples from our debate teams!

'Girls are allowed to be educated in Sparta! Just one of the many reasons why it would be absurd to live in Athens! Only few people have rich parents so what would the rest of the girls do? Don't be an idiotic fool!'

Acquiring knowledge on a significant event in Greek history involved the exploration of the Trojan War.

Using our research skills we discovered that the  Trojan War was a famous story told in the Iliad. The Iliad is an epic poem written down about 2,700 years ago, although the story is much older. It was first told and sung orally during the Greek Ages by travelling storytellers.

After the Greek Ages, Homer, a Greek poet, supposedly wrote down the entire story somewhere between 750 BC and 650 BC, so that it would never be forgotten. The Iliad is the story of the 10th and final year of the Trojan War. It focuses on a brave and powerful Greek warrior, Achilles. We explored the story of the Trojan War and then used our newly acquired knowledge and writing skills to rewrite the (epic) tale in 100 words!

Here is an example from Amelia, Class 8:

Three Goddesses had an argument so they asked Prince Paris of Troy to settle it. Paris accepted Aphrodite's deal so that he would fall in love with a woman called Helen- the queen of Sparta. King Menelaus, the King of Sparta, was extremely angry so sent an army to get her back. The tiring battle lasted for ten years. The war finally came to an end because the Greek’s created a wooden horse to trick the Trojans. At first, the Trojan’s thought it was a gift from the Gods however the Greek’s were inside and killed them all.

Did you know that historians cannot be certain the Trojan War actually happened? When we explored the facts we learnt that, according to the Greek literary evidence, there were at least two Trojan Wars (Heracles’ and Agamemnon’s), not one. This made us think that the story in the Illiad, although amazing, is unreliable.' - Isabelle - C8

I think that the key figures in the Trojan War, such as Hector and Achilles, are portrayed so well that they have to have been real. I hope the Trojan War actually happened as I like to believe in all of the heroes it describes! - Anthony, C7